A new book by Frédéric Anquetil tells the story of Annette Monod Leiris, a Quaker who was practically the only person able to help the thousands of Jews who were rounded up by the French Vichy authorities in July 1942, and detained in horrific conditions in a Parisian cycling stadium before being deported to the death camps.

Annette, whose role during the infamous “Vél d’Hiv” round-up is also shown in the 2010 French film “La Rafle“, went on after the war to work tirelessly for prisoners, and also helped set up the Association of Christians for the Abolition of Torture, or ACAT, which is still going strong today.

Frédéric Anquetil will be at the International Quaker Centre in Paris at 2:00 pm on Sunday, February 3, 2019 to give a talk about his book, “L’ange du Vél d’Hiv” (The Angel of the Vel d’Hiv round-up). 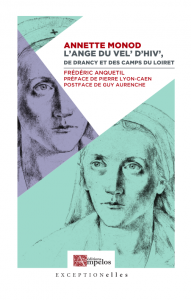